Have you noticed that the presidential race is fueled by anger? 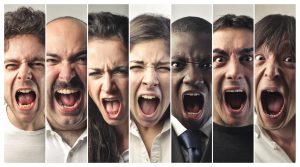 Tuesday was primary election day in Maryland, and I voted for a losing candidate. He isn’t angry about the right things for enough people. People of all stripes feel that their rights are being violated and declare, “it’s ‘s not fair!”

It’s difficult to be angry about the same things as everyone else because people are mostly angry with others who are angry with them.

Frustration, anger, and bitterness know no bounds.  We all carry and nourish them everywhere we go—home, work, and to the ballpark, and it is easy to see the havoc they wreak.

Somehow we have deluded ourselves into believing that politicians are responsible for and capable of making life fair and for ensuring that our “rights” are never violated.  So, we “run” to politicians who share our brand of anger, huddle with like-minded malcontents for affirmation, and harden ourselves against “them,” whoever “them” are.  We run into angry arms for justice.  To me, that is inane.

The unyielding insistence on being treated “fairly” is foolish.  We ourselves don’t always treat others fairly and cry out for understanding when we don’t.  So, really, we don’t always want fairness. We don’t want our just desserts once we realize what they are.

The “fairness economy” is a losing system; it feeds self-centeredness, bitterness, and resentment. Humans have a penchant for distorting reality and esteeming themselves more highly than we ought to. Psychologists even have names for our distortions, e.g., self-serving bias, self-enhancement bias, self-confirming bias, and the ultimate attribution error.  When others don’t treat us in accordance with our rosy self-portraits, it feels demeaning, and our anger is aroused. Then a battle ensues.

What if we didn’t make “getting our due” the supreme rule in life? What if we pursued a more noble cause in our businesses?

The apostle Paul commended people to live in the “servant economy” when he wrote:

Do nothing from selfish ambition or conceit, but in humility count others more significant than yourselves.  Let each of you look not only to his own interests, but also to the interests of others.

Can patriotic American capitalists make this a guiding principle instead of “getting my due”?  Would that be contradictory? I think not.

If we would esteem others more highly than ourselves at work, we would take a giant step away from anger and towards reconciliation.  “If” is a big word though. There is a reason why people turn to politicians for justice.  It’s easier to toss the burden on someone else rather than to carry it personally.